The Mediterranean island nation of Malta has recently earned the name ‘Blockchain Island’ as the two largest crypto exchanges,Binance and OKEx, are both relocating to the island. The epic proportions of the Malta Blockchain Summit, set to take place at InterContinental in November, is a reflection of this momentum. The summit includes four conferences, a massive expo floor, a Hackathon, an ICO Pitch and a Crypto Cruise, and is expected to attract no less than 4000 delegates, 100 speakers and 150 sponsors and exhibitors from prominent players in within blockchain and DLT.

Inspired by the recent initiation of Malta’s Virtual Currency Act and the skyrocketing interest in Malta as an upcoming blockchain jurisdiction, the Malta Blockchain Summit will be held for the first time this year on the 1st to 2nd November at the Malta InterContinental in St Julian’s.

The summit is comprised of four conferences covering the field’s government and regulation, marketing and affiliation, fintech, tokenomics and cryptocurrencies, and blockchain for developers. To provide maximum value for their exhibitors, blockchain developers and affiliates are invited to the Malta Blockchain Summit free of charge. The summit also includes a Hackathon, an ICO Pitch, a buzzing expo floor, and ends with an unwinding Crypto Cruise.

Boasting over 4000 delegates, 100 speakers and 150 sponsors and exhibitors, the Malta Blockchain Summit promises to be an innovative and momentous opportunity for global influencers to network, forge new connections and debate the potential applications of blockchain across a myriad of industries such as health, entertainment, government, and banking.

“I wish to welcome every blockchain enthusiast to the Malta Blockchain Summit, a melting pot for global influencers in technology, civil society, democracy promotion, and innovation. Expect riveting discussion about the world-changing potential applications of blockchain across multiple verticals, including, but not limited to health, entertainment, government, banking, payments and fintech, and more,” says Eman Pulis, Managing Director of the Malta Blockchain Summit.

With the announcement of the relocation to Malta of the two largest crypto exchanges, Binance and OKEx, it is increasingly evident that the island is on the best track to become a center of excellence for emerging blockchain and DLT – hence it has recently earned the name ‘Blockchain Island’ in social media.

The Malta Blockchain Summit is riding the wave and has already sold out all platinum and silver exhibition packages, as well as a fourth of all tickets, more than six months ahead of the event. 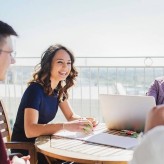